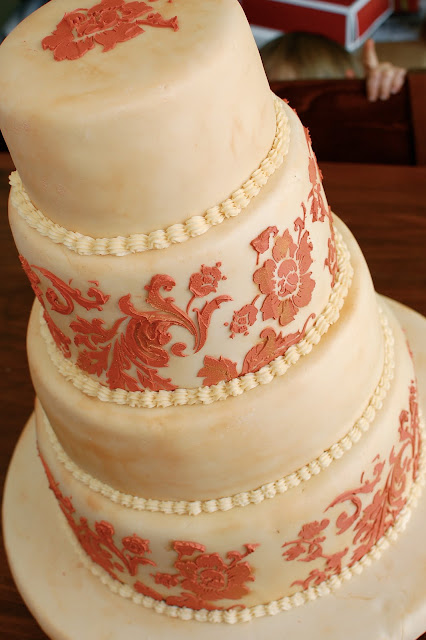 I believe in wedding cake. The symbolic act of sharing a sweet bite of the same creation with your betrothed, along with your friends and family. (You just can't get that kind of togetherness from a cupcake.) This is why to me, making a wedding cake is such an honor.  And I was especially honored that Lorie (yes, the universe has put two 'ie' Lories in the same circle) asked me to make a wedding cake to be shared at the party to celebrate their elopement to Las Vegas the weekend prior. 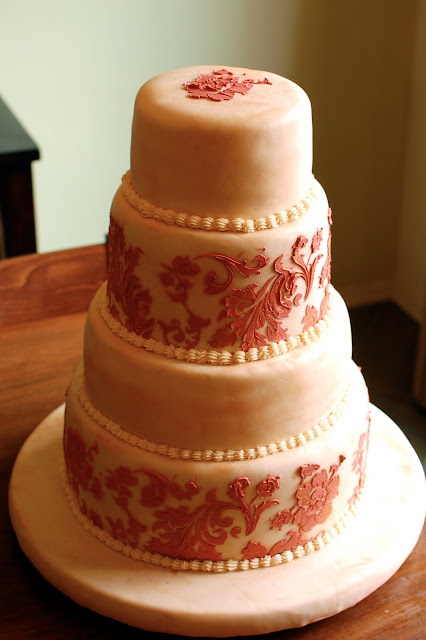 The flavors for the cake were White Almond Sour Cream with almond buttercream and raspberry filling (this was the top and the third tiers) and Dark Chocolate Sour Cream with whipped New Mexican Red Chile ganache filling (this was the second and bottom tiers). I covered the entire cake in marshmallow fondant. The base was 12", then 10", 8", with a 6" top that was saved from serving for the first anniversary.
The decoration and color of the cake was inspired by the invitations that Lorie and Joe chose for their reception. The base color was an antique ivory with Aztez gold luster dust buffed on with a brush to create the parchment effect reminiscent of the invitation. The floral and scroll stenciling was applied in royal icing, and buttercream was used to finish the borders.  Lorie opted for not having a cake topper, so I just repeated the flower from the stencil over the hole where the center dowel was inserted.
Now for some 'in progress' photos: 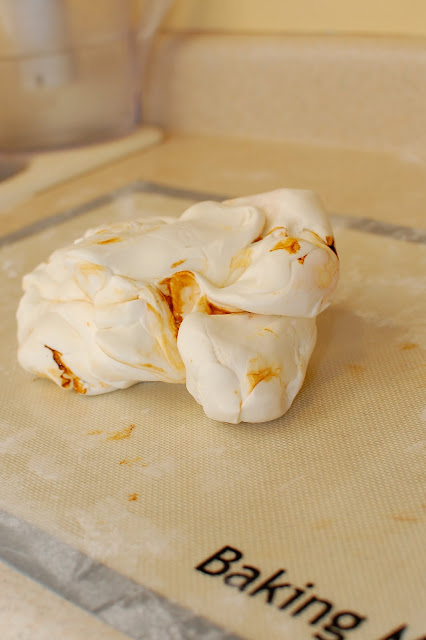 Earlier in the week, I started making the marshmallow fondant. This involves melting marshmallows and kneading in eight cups of sifted power sugar along with flavoring and then color.  Store bought fondant is definitely easier, but has a plastic aftertaste (and has given fondant a bad name). This is super sweet, but at least tastes like a big marshmallow. 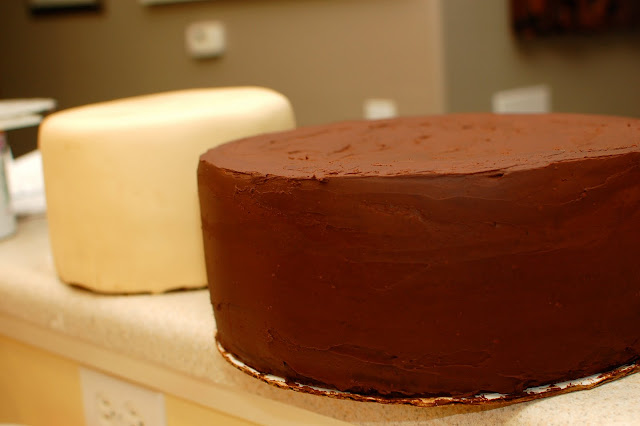 The hardest part of working with fondant (especially home made marshmallow because it is a bit softer) is getting your cakes perfectly smooth underneath.  This is difficult to do with buttercream without having large refrigerators to hold the cakes and give them a nice firm texture. I decided to try using ganache as a cake cover and was amazed by how clean and smooth i could get the sides of the cake. And it firmed up beautifully with no spring to the sides, holding the filling between the layers in place perfectly (no bulge! Yippie!). I will be using chocolate or white chocolate ganache under all fondant cakes from now on. It performs just beautifully. 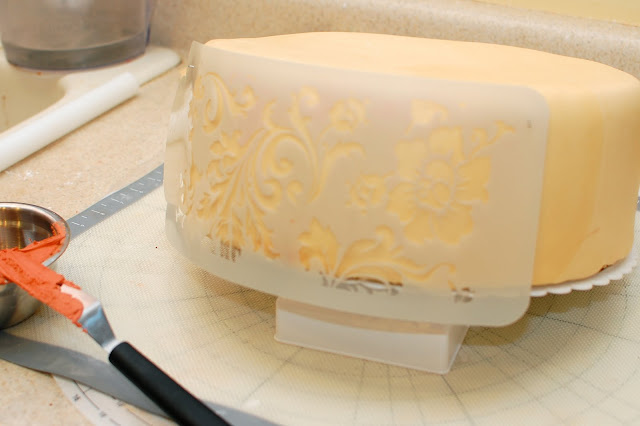 This is a food grade stencil from Designer Cake Stencil ordered from Global Sugar Arts.  The pattern matched Lorie's invitation theme great, and I want to use it again for a western themed cake (doesn't it look like the tooling on a saddle? Entz rose?) This technique is completely nerve-wracking because once the royal sugar goes on the cake, there isn't much that can be do erase the color on the light fondant. I did  have a couple of areas where it scooted under the stencil, so I used a tool to re-carve the leaf and scroll patters. 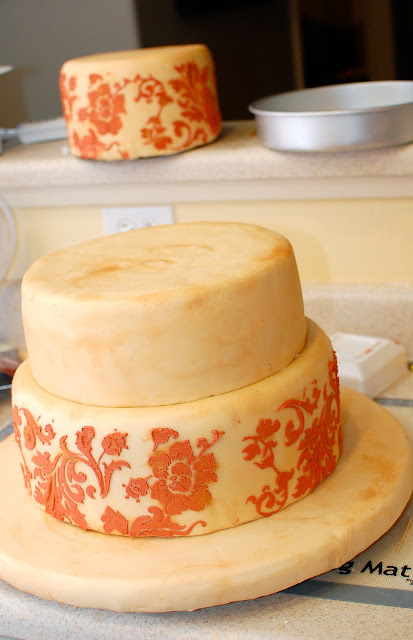 Because of the weight of the cake, I had to use a wood board as the base of the cake. A blessing in disguise was that my Home Depot didn't cut masonite into circles, and I had to go with a precut, pine table top from the lumbar department.  It was presanded and easy to cover with the matching fondant.
Stacking a tiered cake is always a challenge. I think now that with any distance to travel with a tiered cake that I will take the layers separate and stack and finish the design on site. Even though the cake boards say that dowels and a center rod through the whole cake will hold, two hours on I-10, cattle guards and banked off ramps (and the near drop putting it on the high serving bar) cause some compression and a bit of a tilt. In all the cake weighed around 75 lbs. 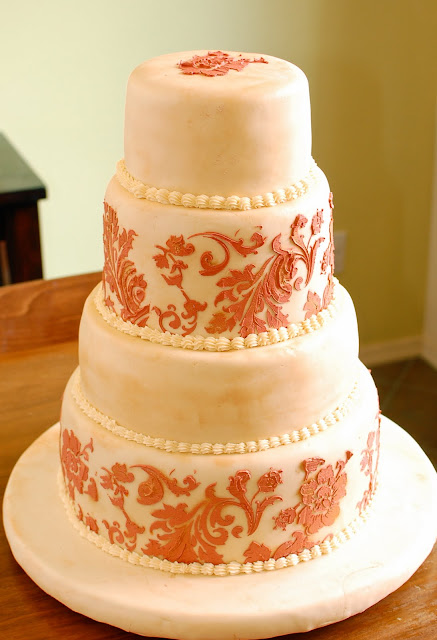 After stacking, I applied a quick border of buttercream piped in small shells to complement the delicate scrolls and flowers. Then overdusted the stencils with a bit more antique gold luster dust for depth and a bit more glitz. 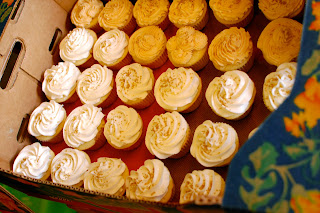 Also part of the baking was a side order of White Almond Sour Cream cupcakes with vanilla buttercream and gold sanding sugar finish.  The kids really liked these.
Posted by Lorie at 10:21 AM 6 comments:

Newer Posts Older Posts Home
Subscribe to: Posts (Atom)
all photos and content are copyrighted material and may not be copied or reproduced without written approval.