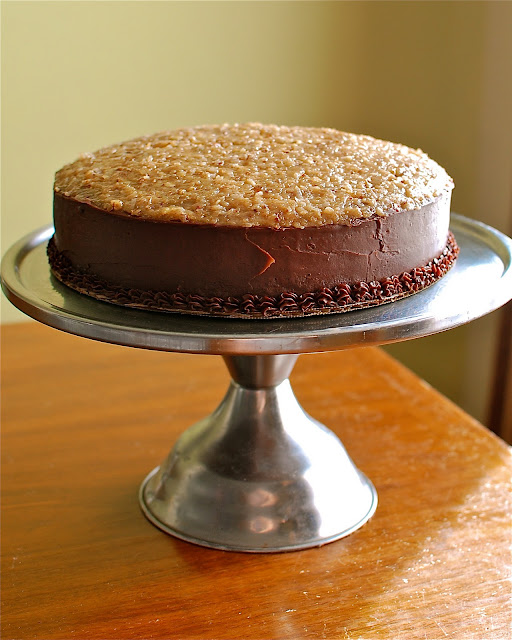 I know it doesn't make sense to call this cake a 'mistake,' but that's what this was while intended for the original project. This was supposed to be the chocolate layer of the birthday cake I did this weekend, but it was a new recipe and the 'milk chocolate' of it came out much to mild for a kid's birthday cake.  (That required some major chocolate!)

But it was perfect for a German Chocolate Cake. I split it and did a layer of left over Ghirardelli dark chocolate ganache I used under the fondant of the birthday cake, and a layer of pecan coconut filling. (this is a secret now: I usually keep a tub of the pre made stuff in the pantry and add fresh brown sugar, chopped pecans and sweetened coconut to it. Scandalous, I know. )

I ended up with this lovely 10 " that went with my husband to his office, and a second 6" made up and waiting in the freezer for just the right time--or special guest to drop by. Maybe there are no mistakes, just different cakes waiting to be frosted.
Posted by Lorie at 7:18 PM 4 comments:

Zoinks! Rebecca and Zachary Had a Birthday Mystery. 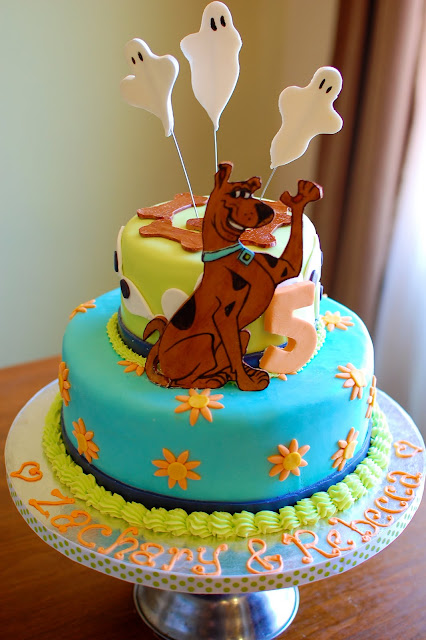 This groovy cake went to solve the mystery of the Twin Tikes Birthday Bash today.  Luckily this brother and sister both love this goofy hound and his spooky adventures. I love the Mystery Machine color palette--this cake was a blast start to finish. And I did get away with it, even with those meddling kids!

The cake is a 10" & 6" with one layer each of sour cream devil's food and white almond sour cream. The filling was vanilla Swiss meringue butter cream and under the marshmallow fondant the cakes were dressed in a layer of dark chocolate ganache. Scooby and the spooks are fondant gum paste over-painted with Americolor food painting and food safe marker (my husband used his  illustrating skills to really bring those fine details to life). Almond flavored buttercream finished the borders.
Posted by Lorie at 7:52 PM 2 comments: 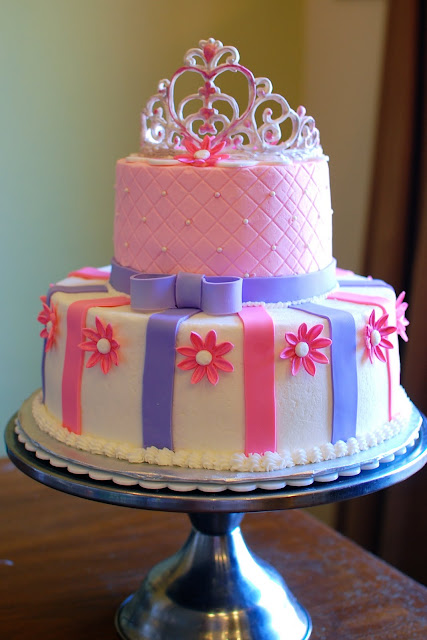 I am lucky enough to have friends with fanciful little girls who delight in all things princess. This gave me a great opportunity to make a princess cake for a pretty princess party. 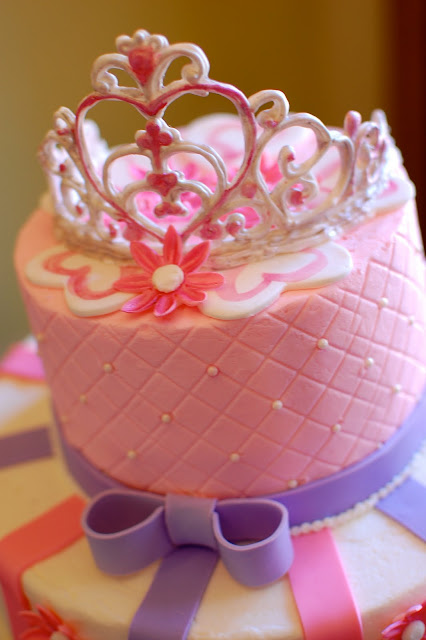 This cake was 10" and 6" and frosted in all buttercream. The top tier was quilted using a mat pressed into the smoothed frosting, then small sugar pearls were applied with tweezers to complete the look. Fondant (and fondant/gum paste) was used for the stripes and daisy accents. The tiara was made from royal icing and finished with silver and pink luster dust. It rested on five hand painted fondant hearts. The cake was white almond sour cream with lemon filling. 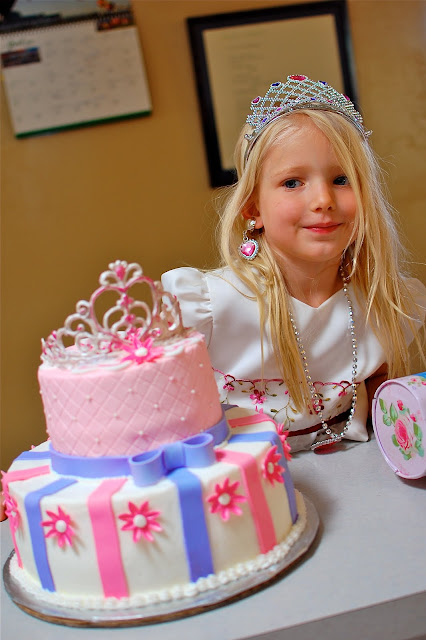 I was so happy to have helped contribute to this little angel's Princess Birthday. (isn't she just precious?)
Posted by Lorie at 6:30 PM 2 comments: 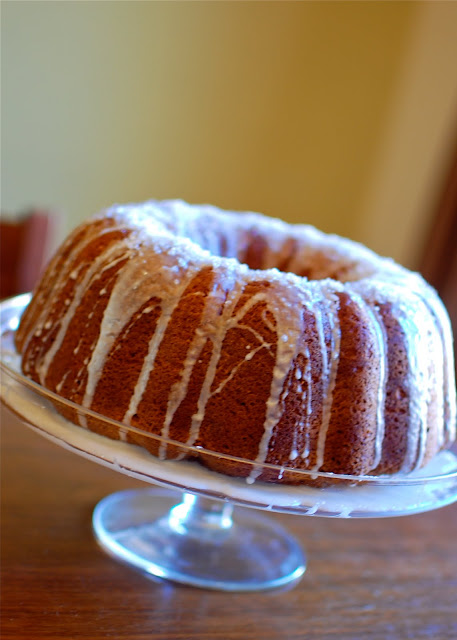 Nothing says spring like the hint of citrus blossoms in the air, unless it's the decadent thud of lemon sour cream pound cake after an Easter dinner.  I have figured out the secret of this fine crumbed, yet heavenly moist undertaking: creaming the living daylights out of it until it begs for mercy in it's fluffiness. (If that sounds a little melodramatic, that may be because I'm still in a food-coma)

We served this one with fresh strawberries sprinkled with sugar and let to chill for a sweet strawberry sauce.  My cousin Katie finished the cake with a lemon glaze and a generous sprinkling of sanding sugar.

The trick really is in the mixing; and this one takes a full 20 minutes on the KA stand mixer to do it right. If anyone is interested, I'll elaborate on that later. Once the digesting has completed.
Posted by Lorie at 8:24 PM No comments: 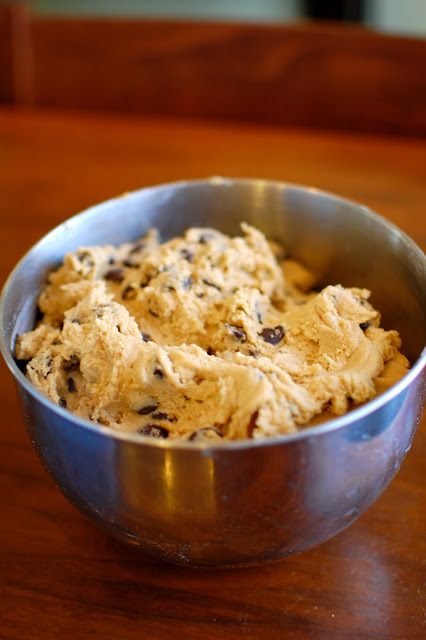 For a while now, I have been thinking of branching out from the family standard chocolate chip cookie recipe, the Toll House Cookie recipe. But that felt wrong, a little unseemly, to turn my back on a trusted member of the family. But finally I had to dive into that uncharted water once and for all to answer the question: was there something better? or would my cookie cheating be for not?

To make it a bit more interesting (and a bit less personal), I used the opportunity of a cookie bake off to try a different version of the Toll House recipe that called for more brown sugar and less white than the standard 3/4 cup each of the TH. The main defining point in the test was if the sugar should be creamed until fluffy, or if it should be melted. To make things a bit more fair, I also opted to chill both doughs before baking, and used the same size scoop.
The top photo is of the cookies with the creamed butter and sugars. This recipe felt more like home, and who doesn't love to take a finger of that fluffy whipped sugar concoction right before the eggs are added? And the music of the mixer and the smell of that vanilla...my mouth is watering just thinking of  it. 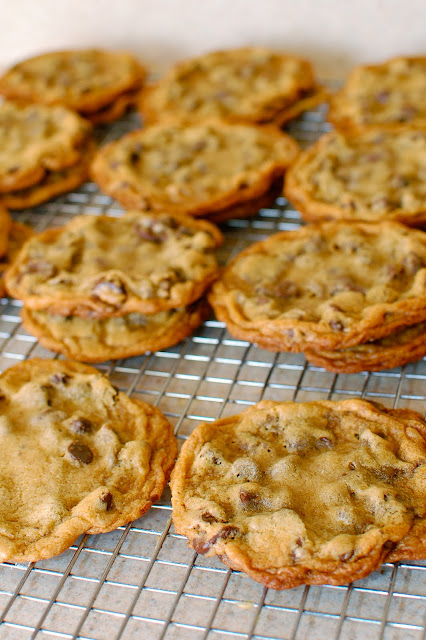 Ahhhh...Cookies! But I realized that after they came out that my baking soda was a bit too old and I didn't get the lift as I should have. But they were still chewy, crisp on the edges and delicious. Recipe used was from http://savorysweetlife.com/2009/10/alices-chocolate-chip-cookie-recipe

**********
Next comes the *NEW* to me recipe involving melting the butter before adding it to the sugars, and then not even turning on the mixer (???) but using a whisk to dissolve the sugars into the butter. This was the America's Test Kitchen website http://www.americastestkitchentv.com/recipe.asp?recipeids=5489&iSeason=10 . 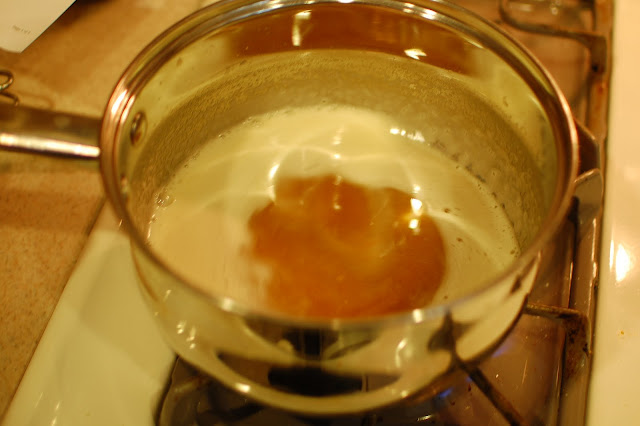 Also new to me was browning the butter before adding it to the sugars. If you haven't yet tried the magic that happens when butter is allowed to come to a lovely nut brown color when over heat, do it now. It's great on pasta, in sauces and now I know, in cookies. 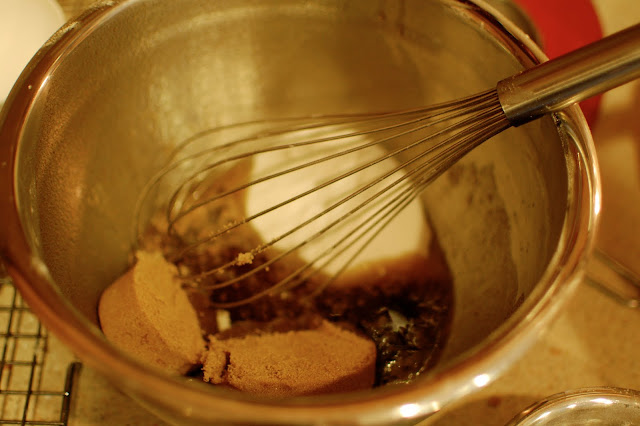 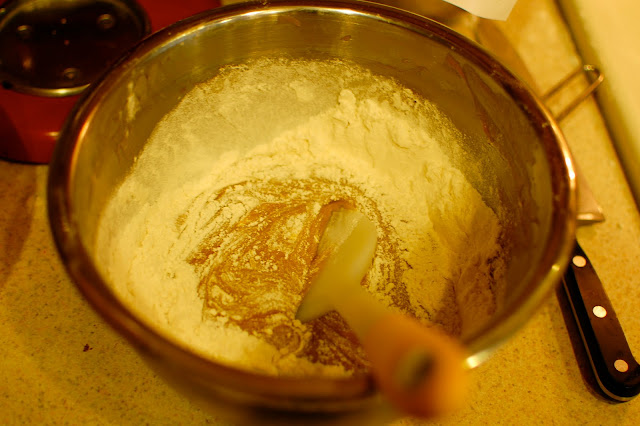 Finally it was time to gently fold in the flour mixture. Also missing was the feeling of power watching the Kitchen Aid muscle through a whole batch of dough. This was, well much more refined. And I'm not sure how I felt about that. 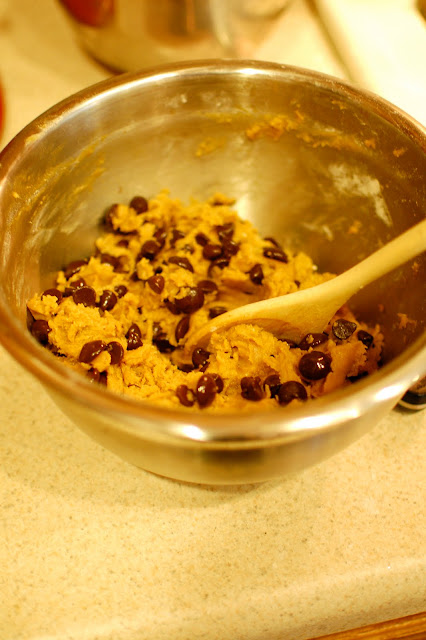 I scooped out the balls with an ice cream scoop and chilled them so that both my test batches were starting from the same point. The batter was kinda greasy looking. It didn't look like it longed to be dropped into a bowl of vanilla ice cream. I didn't have high hopes for this. 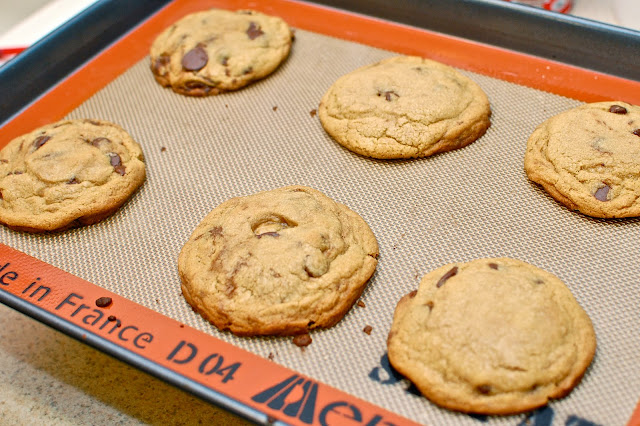 Then the moment of truth came, and out of the oven it came with glory.  These have to have been the most 'professional' looking cookies that I've ever made. The taste was amazing as well--that browned butter really raised the complexity of the cookie base. And they stayed chewy and soft on the inside with a nice crisp exterior.
Unfortunately for the test batches I wasn't able to see how they each lasted over a few days as I used them as thank you gifts for a project at my son's school.  But each bagged up and dressed with a bow looked like a tasty treat for the recipients.
In the end, I can't say which cookie recipe I'll be turning to next. I know that I really love the browned butter version, but tradition still pulls me to hauling out the KA and creaming that batter into fluffy nostalgic clouds.  But is this really a problem? Can we really have too many cookies?
Posted by Lorie at 12:16 AM No comments:

Newer Posts Older Posts Home
Subscribe to: Posts (Atom)
all photos and content are copyrighted material and may not be copied or reproduced without written approval.